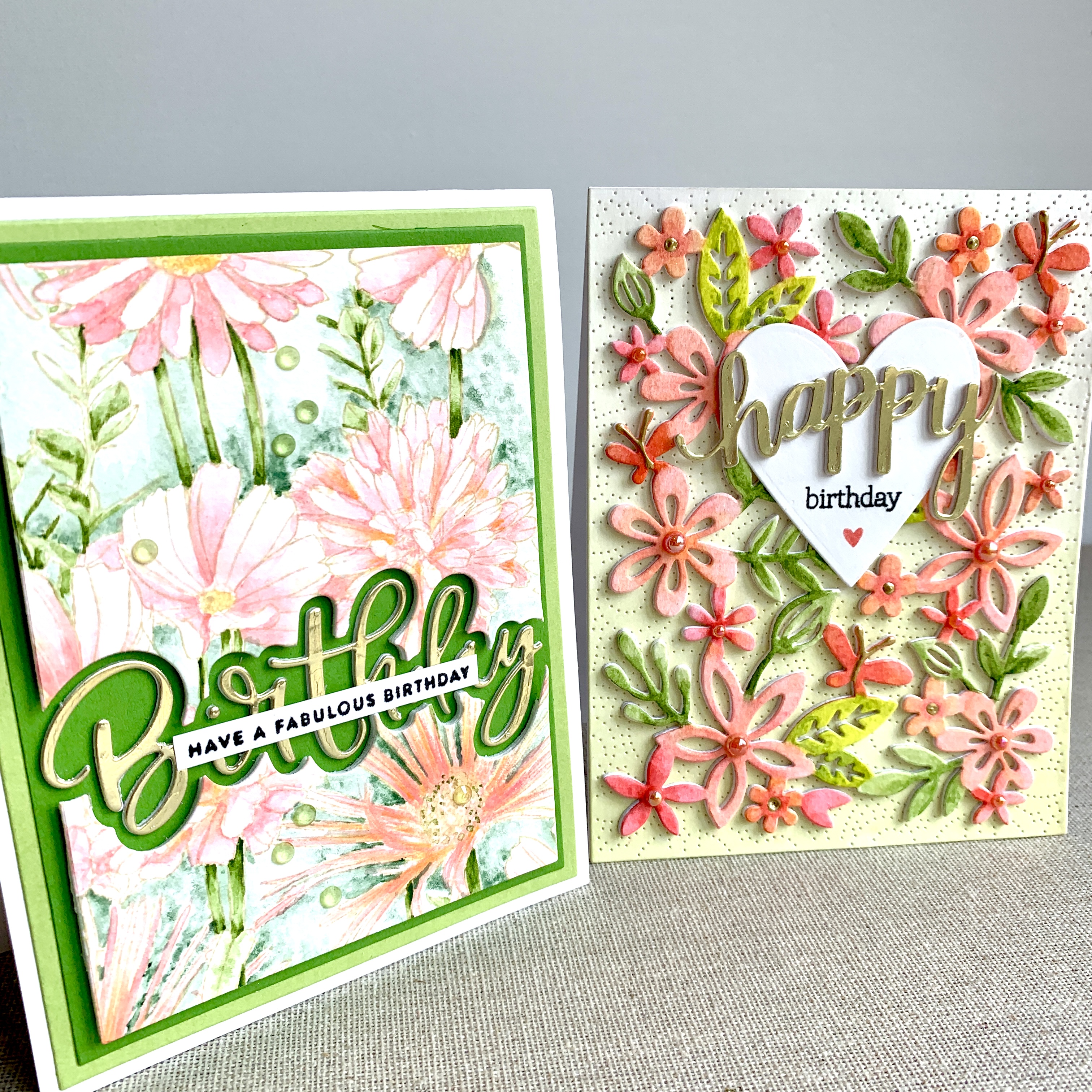 I was very excited to be the Winner of the Navy & Cream Color Hues Challenge – you can check out that card here. My prize is to be Guest Designer for this challenge, yay!

I ended up creating two cards with peach and green colours, I was having fun with my new (to me) Altenew Watercolor 36 pan set – they are so nice to paint with!

I die cut the Hero Arts Flower Garden from watercolour paper and leaving it all together, painted directly onto the entire panel. I found this easier to paint the delicate piece.

I cut two more from Bristol Smooth cardstock to stack behind for dimension.

I did a gentle watercolour wash on another piece of cardstock using Distress Ink Shabby Shutters, a really gentle green. I used a wide paintbrush and painted water over the panel first. I smooshed the ink onto my work surface and picked up colour with my brush, and swept it back and forth across the panel, aiming for a pretty ombre effect. Once dried, I then used the Simon Says Stamp Detail Bohemian Plate to add a little interest – the dot details kind of matched the floral shapes of the die cut.

I cut the larger heart from the Simon Says Stamp Heart Duet set (sadly discontinued, but any heart die would work), and stamped the birthday sentiment and a tiny heart towards the bottom, and a stacked Hero Arts ‘happy’ die cut on top. I finished the flower garden with some dark peach gems and gold Liquid Pearls.

I have been using this Flower Fields background stamp in a number of projects lately, and decided to paint it with the peach and green colour way. I stamped the image with Antique Linen Distress Oxide for the ‘no line’ look.

I used the Altenew watercolours to paint this too, using the exact same colours as the above card. This time, I was going for a more subtle look – subtle takes practice!

I used the Honey Bee Stamps Birthday die – this little set comes with the birthday die itself, the shadow die and a further shadow die with extra piercing. There’s a matching sentiment set, and I’ll link to that below too.

I used the plain shadow die to cut the floral panel just below the centre and popped the pieces up with double sided foam onto Gina K Grass Green cardstock. I stacked the birthday die cut with gold in the space between.

I felt the white card base was too stark, so I added a lighter green mat in Jellybean Green. I finished the card with a sentiment from Simon Says Stamp Tiny Words Birthday and a few Peridot gems from Studio Katia.

I have recently discovered a new black ink pad – a friend was visiting and introduced me to the Versafine Clair Nocturne ink pad, an incredibly dark, crisp black. My new favourite for sentiments! Especially those hard to stamp solid lettering sentiments, wow, what a difference! It is a pigment ink, so not suitable for Copic colouring, but you can use it for watercolour.

This completes my pair of cards as Guest Designer for the Color Hues Color Challenge today. Thank you for stopping by! Below are links to the products I used. Some are affiliate links (not all), which simply means I may get a small commission when you shop, at no extra cost to you. Thank you for your support. 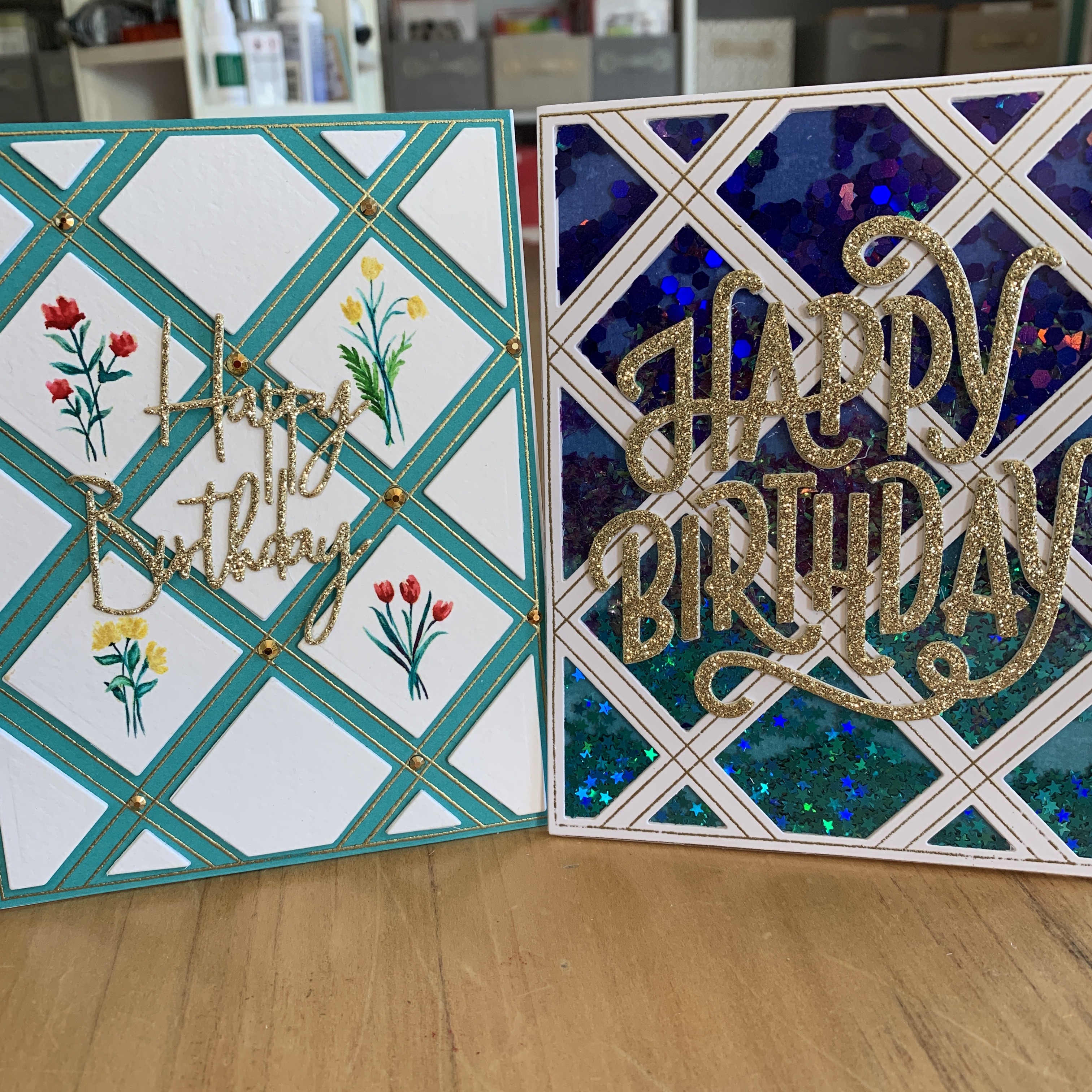 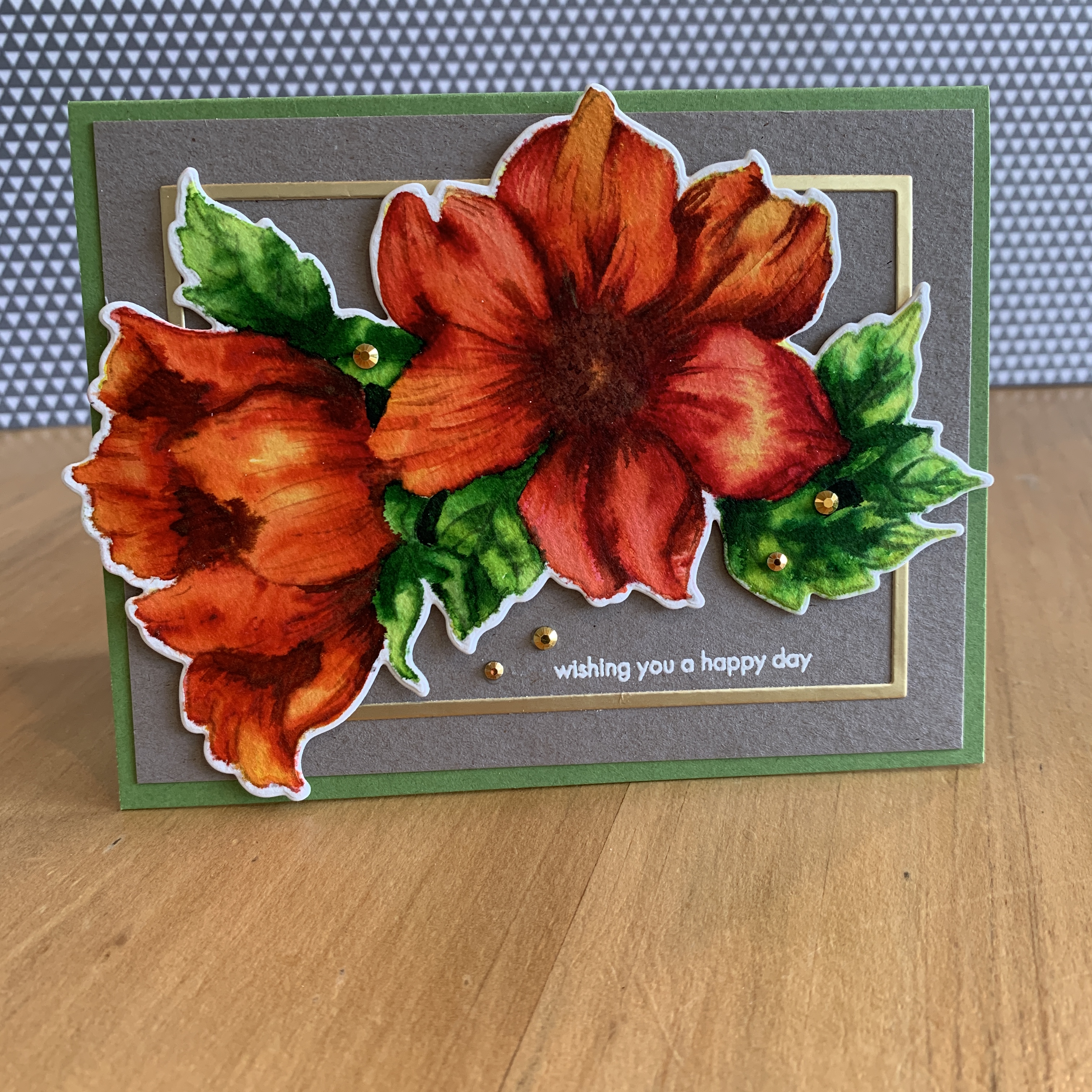 I’m not usually a floral type person – I don’t even do gardening! But this new Altenew stamp and its matching die just looked too amazing to not have in my stash.

I had a go at no line watercoloring – there are so many inspiring cardmakers and artists out there showing beautiful images with this technique and I really wanted to join the trend.

I stamped the image with Gina K Whisper amalgam ink and I used Ken Oliver Color Burst powders for my painting. Colour Bursts often come in packs of 6, but your local store may have them singularly for retail.

I painted it a small section at a time – putting water down first, picking up the powder with my brush and letting the water do most of the blending for me. The flowers ended up a little darker than I anticipated, so that is something to practice next time. I spent the better part of an evening painting this image, but it was well worth taking the time!

For the card front, I used a piece of cardstock from my stash which is not quite Kraft, but not quite grey either – it’s called Concrete Grey and I found it in my local stationery store. I’ll link to it below for your reference.

I had some matte gold frames leftover from a previous project – the Altenew Fine Frames cover die cuts a bunch at one time – and I selected an appropriate sized one for this card.

I heat embossed the sentiment from the same stamp set just inside the frame. I cut the flower out with its matching die and attached it with foam tape which gives it just a little lift from the card front.

The card base is Gina K Designs Grass Green – such a delicious colour! Gold gems from Pretty Pink Posh complete the card front.

This completes my card today. Thank you for stopping by! Below are links to the products I have used – some are affiliate links (not all) which simply means I may get a small commission at no extra cost to you when shopping. Thank you for your support – it means I can keep creating and sharing with you.